The Abster is a grumpster this morning, didn’t want to get ready for school!  We distract and stay busy once we’re all ready and waiting for the bus!

She wasn’t very into doing her exercises with me this morning, but she did them.  Then we smelled the roses and pulled the petals off to stay busy for the rest of the time.  This is a favorite activity for Abbey, but I don’t let her do it very often, so she sure got into that!

Here she is with the roses:)

Click on the video below to see her doing her exercises, rather grumpily:

P.S.  She’s carrying her iPad mini in a Chat Bag, found at http://www.chatbag.net

Here’s Abbey actually playing with some toys appropriately, which is hard to come by!  Ok, well, kind of.:)  It’s super neat to see her playing and not ‘stacking or piling!’

You’ll also notice the sensory component that is included in everything she does!!

Posted by mbrooks2b on November 2, 2013 in autism, sensory

Day 17: My Autism Video Diary – Why does progress always pair with other problems??

Abbey has made so much progress communicating and with so many of her really hard behaviors, but why does it seem like when they make great progress in one area, another area gets harder?

It seems like Abbey’s sensory world just gets completely out of control, out of this world crazy sometimes, and we’re seeing it now more than ever!  Is it just because she’s so much bigger and older now?  She has broken a very long list of things in her house like her window, holes in walls, our couch, her bed, more chairs than I can remember, just to name a few…and none of them when she was mad!  She broke all of these things just rocking, bouncing, jumping around in big, huge movements.  We have swings inside and out, exercise balls, stuff to chew on, sensory stuff all over our house for her to play with…but it’s just not enough.  Will we be able to find something that is enough?  I don’t know, but we’re working on it!  We’re working on another outside trampoline as her inside one just doesn’t seem to do much for her…but, problem is, she’s so heavy and so rough on things, we need a really good, safe one…yes, expensive, just like everything Abbey needs and breaks!  Well, more praying!  AND, as we work on these really hard things, we’re just gonna keep on focusing and celebrating the great things that are happening, ’cause that’s what it’s all about!

Ugh, sensory issues are so hard!  Just when you think, just maybe, the days of picking tiny pieces of non-edible things out of their mouths is over, it’s not.  The need obviously comes and goes, for Abbey anyway.  Pica, or chewing on all those non-edible things, has always been a problem for Abbey.  We go through so much Spry gum, it’s crazy!

We’re working on getting her a big trampoline again, realizing how much she really does need that outlet and that sensory input.  Finding the sensory things that help them, can make such a difference and teaching them to learn to ask for those things is imperative!

Well, for some reason teaching quantity, for Abbey, has been a huge challenge.  So, finding apps that she likes that can help with this has been a lot harder than, say, word apps, tracing apps, etc..

Watch a video of her playing with her fav ones…Click here!  Or just click on the video below, to view it!

The pics shown are from the app, Critter Doodle Math: Numbers.  There are lots of activities, but by far, Abbey’s fav activity is the tracing.  I am pretty sure it’s because you pop the bubbles as you trace the number, but then the cool part is that, as you see below, when they are finished tracing the number, bubbles come up to pop and count, for each number.  That’s a very motivating way for Abbey to learn quantity!

One of the other great activities is teaching largest to smallest, big and small.  This has also been a hard concept for Abbey and she enjoys this activity as well! 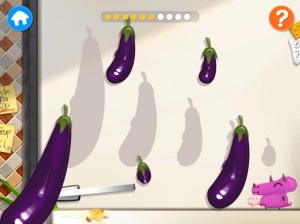