Abbey is working on a reading curriculum at school called Edmark and seems to be doing well, so I thought it would be good if I could do something over Christmas break to keep working on her reading and spelling.

I googled Edmark and found some great stuff to print out at home, to work on her words at home.  She’s actually on words 11-20 right now, but I know that there are a lot of other words she is reading and can spell, this is just a way to keep track, let her show us what she knows and work on words that she doesn’t know…but especially work on her typing words into her communicating app, hopeful that this will lead to more communication!

Here’s a video of us working on the stuff I printed out, just day one!  I’ll try to do some more videos as we do more.

Click here to watch the video of Abbey at work.:)

P.S.  I found the printable on a site called http://www.teacherspayteachers.com/.  Some were free and some were a few dollars.  They have all of the Edmark words to work on in many different ways.  They have lots of great stuff!:)

Anticipating Christmas…making a folder in Proloquo2Go! 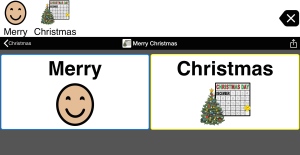 Abbey is truly starting to anticipate parts of Christmas!!  She’s looking in her stocking often, wondering when the day will come.  We’re marking off dates on the calendar, heading towards that big circled day…wondering if she’s understanding that, or not??  She visited Santa, not too impressed still, but pressed Santa on her iPad and after a bit of prompting told him ‘thank you’ for coming over to see her.:)  Her favorite button?  CANDY CANE, of course!  Some of these buttons go to a set of Melissa & Doug wooden Christmas cookies.  He behavior specialist plays with this set with her and uses these buttons.

Pretty cool, we’ve got a Halloween folder also now and she knows how to use it…now, working on Christmas!  Making communicating fun and meaningful for her is so rewarding.  That moment when she opens up those new folders that you’ve made and spontaneously uses one or more of the buttons, such a wonderful moment!!

How have you made a Christmas folder for your kids??

Day 21: My Autism Video Diary – Request of the day on Proloquo2Go on her iPad!

Here’s Abbey asking for the same thing over and over….she’s got a one-track mind today!

It’s been a rough week of not enough sleep for either of us.  We’re doing much better now so I’m counting my blessings as she repeats herself over and over, so thankful that it’s in such a nice sentence!:)

It’s so important to look back!  Sometimes you feel like you’re at a stand still, not making much progress or that it’s just going so slowly.  When you look back and see, over time, all the progress there has been, it can give you that motivation again to keep on truckin’!  Whether you’ve video taped when they were younger or have old IEP’s to look at or just even old pictures, look back, look at how far you’ve come!!  Look at how far we’ve come!!

Click on the video below! And, wait until you see the video on the bottom…a blast from the past!:)

Click on the video below to see Abbey getting ready in the morning, right after we started using a picture schedule for her, before she had a communicating device.  It made such a difference with her!

Day 17: My Autism Video Diary – Why does progress always pair with other problems??

Abbey has made so much progress communicating and with so many of her really hard behaviors, but why does it seem like when they make great progress in one area, another area gets harder?

It seems like Abbey’s sensory world just gets completely out of control, out of this world crazy sometimes, and we’re seeing it now more than ever!  Is it just because she’s so much bigger and older now?  She has broken a very long list of things in her house like her window, holes in walls, our couch, her bed, more chairs than I can remember, just to name a few…and none of them when she was mad!  She broke all of these things just rocking, bouncing, jumping around in big, huge movements.  We have swings inside and out, exercise balls, stuff to chew on, sensory stuff all over our house for her to play with…but it’s just not enough.  Will we be able to find something that is enough?  I don’t know, but we’re working on it!  We’re working on another outside trampoline as her inside one just doesn’t seem to do much for her…but, problem is, she’s so heavy and so rough on things, we need a really good, safe one…yes, expensive, just like everything Abbey needs and breaks!  Well, more praying!  AND, as we work on these really hard things, we’re just gonna keep on focusing and celebrating the great things that are happening, ’cause that’s what it’s all about!

Day 13: My Autism Video Diary – Here’s Abbey trying to tell me something!

Here’s Abbey trying to tell me something!  The video of her is a bit hard to hear, sorry, should have turned up the volume on her iPad.  I think you should be able to make it out, though.

She’s been doing a lot of talking lately…with her device, which has been very exciting!  She uses Proloquo2Go to talk to us.  And, she’s bringing it to us, which I explain in the video, is huge!

Day 11: My Autism Video Diary – Mornings are a BREEZE!

We used to use a visual schedule for mornings and it worked great, first on her Dynavox, then on her iPad with Proloquo2Go.  We haven’t had to use it in years, though, because she knows the routine and will even willingly do things out of order.

Some mornings are a bit hard to get her out of bed, she’ll pull the covers up over her head…but not usually for more than a few minutes, then she’s up.  Some mornings, she wakes up at 4 or 5, leaving mom wanting to pull the covers up over her head!  But, 99% of the time, she’s happy to get ready, knows just what to do (although still requires my help to do some of it) and is happy to go to school!  Long gone are the days that I thought we’d never get out the door…and some mornings, we didn’t!

Click below to see US talking about it, ok, well, I’m doing all the talking, but Abbey obviously is agreeing with me!:)

Abbey SAID ‘Trick or Treat’ with her iPad, for the FIRST time, using Proloquo2Go!

It so exciting when you find something that motivates your kiddos to communicate!!  It doesn’t come easy, but I think, gets easier as they start learning and start realizing how it works for them.  Some days, she’s a communicating machine and other days, it’s like pulling teeth.  It all depends on her mood and what she wants, how motivating it is for her and how motivated she needs to be that day.  Some days she needs some prompting and other days, she just goes and goes…those days make me so happy!

So, this was a pretty good day!  She was happy and very motivated by candy!  This video shows the progression from the beginning, starting with me showing her what to do, to her figuring it out and going with it!  Candy is extremely motivating, as you will see!  So cute!  I used one of the ‘expressions’ on Proloquo2Go for ‘thank you’, so that’s super cute too…

Click the video below to see her treat or treating, in action!